I’ve been thinking about how some people are shocked or angered by my Twitter tag claim that transitioning kids is child abuse.

I’ve always been very clear about my belief that most parents love and want to do the best for their trans-identified child.   Although a few seem to love the ‘special’ limelight; and some would rather have a trans child than a gay child, most are just going through hell, desperate to make things easier for their kid and taking help where they can find it.  The whole world will shout ‘transition!’ and if you’re resistant to that the accusations of transphobia will come flying pretty fast.  Parents are beguiled on every side: by the well-meaning friends who whisper, “Have you thought he might be transgender?“, the online articles that ask, “Would you rather have a live daughter than a dead son?”, the journalists who continue to spout the discredited “46% of trans people attempt suicide” statistic; doctors who pass families on to therapists and dubious support organisations and then the specialists who say “We can just put puberty on hold for a while…” or “(s)he’s old enough for a testosterone prescription…”

It is the whole package that I call abusive.  The idea of letting a child believe that they are ‘wrong’; that they need ‘fixing’; that somehow the best possible long-term solution is asking the whole world to buy into the lie that they are something that they are not…  to set your kid up for a lifetime of worrying about how they are perceived by others…  and that’s before you even start on the blockers; the hormones; the lifelong medication & the surgeries. I couldn’t buy it then and I can’t buy it now.

A child can’t understand the complexities of adult relationships & the politics of the gender hierarchy,  let alone imagine the changes that come with puberty or the mechanics of sex- and certainly not the possible effects of medications and the realities and problems of undergoing sex-change (now often called ‘gender realignment’) surgery.  Children’s identities are fluid; that’s part of growing up. Doctors. Astronauts. Fairies. Mummies. Daddies. Puppies. Dragons. Pop stars.  Children cannot fail to see the pink and blue gender boxes that are built up all around them. These boxes are sexist and perpetuate stereotypes. We owe it to kids to discredit these boxes. We should not lead them to believe that they ever have to twist themselves to fit into either box because of their personalities, clothing or entertainment choices.

“The family of a transgender child, who was born a boy but now lives as a girl, have spoken about her transition. Nicholas, from near Sheffield, often dressed as a girl at home, but in 2015 aged eight she started going to school as Amber. Her mother said, despite difficulties, she realised she could have a “miserable son or a happy daughter”. The BBC’s Inside Out programme followed Amber for several months up to her ninth birthday. Her story comes as figures suggest a significant rise in under-18s being referred to the Gender Identity Development Service (GIDS). 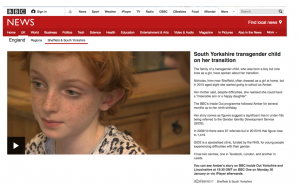 I made the graphic below after seeing Nicholas/Amber on BBC TV. in January 2017.  I was moved by how sad he looked, despite his makeover and the rather cumbersome pink flower perching jauntily in his hair. After falteringly making a short, heart-rending speech about not knowing which gender to ‘pick’, he is asked “What do you think right now?” and replies 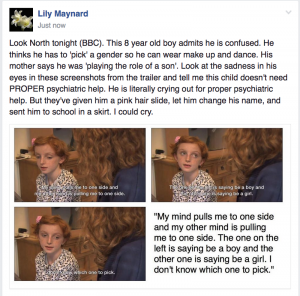 You can hear Nicholas/Amber speak here:

Nicholas’s 15 minutes has come and gone. I couldn’t find any recent information about him online. I hope he’s ok. Maybe he will live happily ever after as Amber but it seems more likely that we’re going to be hearing more over the next few years from kids like Patrick Mitchell from Australia.

Patrick and his mother spoke to the Australian show ’60 Minutes’ in September 2017. After getting the expert advice that his mother sought in the face of his growing distress, he was diagnosed with gender dysphoria at the age of 12.  Patrick lived as a girl for two years. To try to slow his growth and soften his face, he took his mother’s hormones which caused him to grow breasts, “a thing that I wanted at that time”.

Then one day he told his mother, “I’m just not sure that I am a girl”.

Patrick is very philosophical about the experience, saying that transitioning was what he needed at the time. At the time of filming, he was planning to travel to South Korea to have his excess breast tissue removed.

Of his decision to detransition he said:

“I guess I just realised that I could be happy without changing who I am.”

Professor John Whitehall had this to say:

“I think we have to acknowledge that there are a lot of children who are confused about their gender identity…  as a normal phase that they would go through. It’s not uncommon to be confused, The good news is they’re going to grow out of it – don’t mess them up.”