“Would you like the pink box or the blue box?”

‘Gender roles’ are the ways in which society expects women and men to behave. Gender is both a social construct and a hierarchy. It is confining and restrictive and especially harmful to girls. Gender stereotyping starts from the moment we pop out of our mothers’ wombs to be greeted with, “Isn’t she pretty!” or “He’s a strong one!” 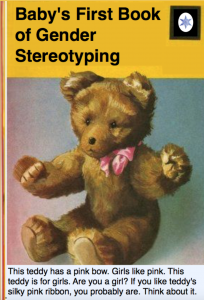 We may think we don’t stereotype kids but we do. How many times have you heard, “Girls just sit and play nicely;  boys just dash around fighting”?

But a girl who wants to run round yelling in the dirt is still a girl.

A boy who likes sitting quietly; pink and dresses is still a boy.

If we accept this as true, what possible reason could we have for transitioning children? The barriers that gender builds up need to be broken down, not fortified with puberty blocker bricks and cemented together with a paste of pronoun changes.

If we are to genuinely value both authenticity and honesty then we need to start by recognising that pushing children into gender boxes is oppressive and sexist.  Telling a boy he can become a girl or a girl she can become a boy is not only untrue and unkind, it is also unrealistic.

1 Response to “Would you like the pink box or the blue box?”