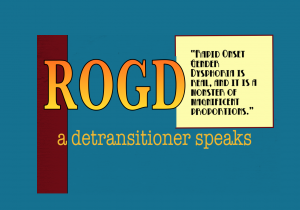 Helena is a young woman who is a detransioner; a young woman who got a prescription for testosterone after a single, hour-long appointment;  a young woman who has agreed to write a guest post about her ROGD experience for this blog.  She joins the ever-growing ranks of desisters and detransitioners. Not all of them feel able to speak out about their experiences.

This is Helena’s story. 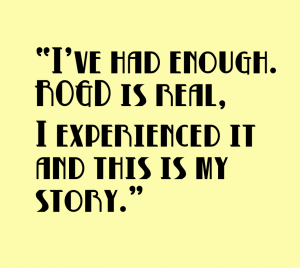 Four crystal clear words that describe a phenomenon we all see but are told to pretend we can’t.

I’ve vaguely opened up about my experience with it, only to be told I’m spreading transphobic lies, and that I should get a hobby. Some trans kid might kill themselves because of my tweets. Well I’ve had enough. ROGD is real, I experienced it, and this is my story. 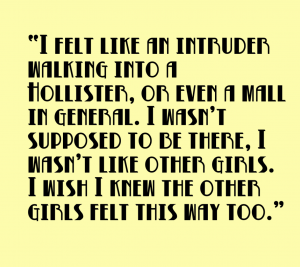 I can’t say I was a gender nonconforming child. I hated wearing dresses to school, but that was only because I wanted to goof around, and frilly dresses got in the way. I did love one long, plum colored dress of mine because it made me feel like a mysterious princess. I loved my Barbies (though I also loved to rip their heads off), and I loved the Barbie movies. I browsed wedding sites, daydreaming about which one would be mine someday. I loved Hannah Montana (but maybe in a gay way now that I think about it) and Camp Rock. I was overjoyed if I got a kids makeup kit for Christmas – I loved all the different colors that I now recognize were all just tinted chapstick. I was pretty gender conforming, but then again, I tried to conform to everything.

I was always torn between my feelings of shyness and insecurity, and my deep desire for friendship and acceptance. I would do anything, say anything, think anything, for the attention of my peers. Though I’m much more shy and reserved now, as a young child I was the kid my teachers despised because I did everything and anything to make my fellow classmates laugh. There was something so broken, so alone, and so desperate for attention inside of me.

Despite this, I loved school. Up through 8th grade, I had so many friends, and I loved them all. I organized ice skating Fridays and Christmas caroling excursions for charity, always with the wavering fear that someday, for some reason, my friends would no longer like me. I needed something to back me up, because me wasn’t enough. Although I made my friends laugh and we all had fun together, there was always something different with me. Towards the end of 8th grade, I began to feel this difference consciously. The girls around me were starting to talk about kissing boys. They started using Instagram, and talking about the latest makeup and fashion trends. They started talking about followers and celebrities – people I had never heard of. My family was old school; I was raised on George Harrison and Pat Benatar, Lynyrd Skynyrd and Heart. Those (and Hannah Montana) were the tunes on my iPod; I couldn’t name a Top 40 song.

I couldn’t stop thinking about the girl with long blonde hair who sat next to me in English, and it didn’t help that she was the only person who was nice to me. The same things that had made me the class clown before – the same things my male friends were still seen as funny and adorable for – now made me a social pariah. I hadn’t gotten the memo that at some point I was supposed to cash in my personality for the ability to be pretty. Until this point I hadn’t really stopped to consider “does this make me a loser?” 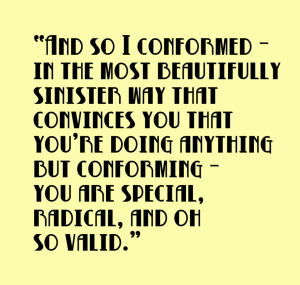 My friends began to dwindle away. I stopped organizing skating nights. I started eating lunch alone. I got a lot of acne. I went from just another weird kid like everyone else to THE weird kid. I began to notice my weight. I began to really notice my weight. I didn’t look like the girls I saw with boyfriends. I didn’t bring a fruit salad to lunch. I felt like an intruder walking into a Hollister, or even a mall in general. I wasn’t supposed to be there, I wasn’t like other girls. I wish I knew the other girls felt this way too.

Sometime during that year, I began to develop an eating disorder. I began to self harm. I had my first suicidal thoughts. I only had one friend, and he was a young gay boy with severe depression and an eating disorder too. I felt that my parents didn’t take my problems very seriously. They’re an older generation, almost 60 now, and think about these types of things differently.  I was alone.

The summer before high school, I found Tumblr. Tumblr changed my life. When I opened my laptop, or unlocked my phone, I was whisked to a world that wasn’t mine. A world where I could talk about classic rock or my favorite things and not go red in the face. A world where no one could see my body or face unless I wanted them to. A world where I could make my jokes and not have to worry if they were cute and quirky type of funny or ‘they’re laughing at you, not with you’ type of funny. They were just funny, and my friends on there laughed at them. It started so innocently. In a small fandom for a certain classic rock artist, for the first time in my entire life I felt understood.

I HATED my body. My body was and still is my greatest enemy. I could never be enough. I didn’t understand why the universe chose me to feel like this. I constantly compared myself to unrealistic “thinspiration” pictures I saw on Tumblr. No matter what I put my body through the feelings didn’t go away. There had to be something – ANYTHING – that could save me.

In October of 2013, the beginning of my 10th grade year, EVERYTHING changed. I know this because a couple months ago I went through my old Tumblr archive. I was so shocked.

Over the span of two weeks that October, the posts on my blog had gone from fandoms, depressive posts about my life, and the OCCASIONAL feminist opinion, to queer, trans, genderfluid, nonbinary, demiboy, valid, problematic, cishets, gender. Every last word. Like a virus.

I remember it being a roller coaster. I kept all of my interests, but they were all tainted with gender ‘headcanons’ (beliefs about a character, usually pertaining to sexuality/gender identity). At first (for like, a week) I was a ‘cis ally’. But something was building inside of me. My two best friends in real life began to identify as trans. Both have since desisted. My inability to accept that destroyed one of those relationships. 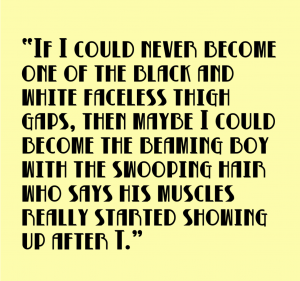 I watched Skylar Kergil and other trans people on Youtube. Skylar said he knew he was a boy when he had a crush on a girl and felt gross imagining being with her as two girls. I knew trans boys always hated wearing dresses, and would scream until they were off. I felt all of that. The thing was, these kids had always known… so I couldn’t possibly be trans, right? But I’m an intelligent person. I overanalyzed every thought and action and word in my life until I made it make sense. As always, I bent my own psyche into submission in order to conform. And so I conformed – in the most beautifully sinister way that convinces you that you’re doing anything but conforming – you are special, radical, and oh so valid.

At first it wasn’t “I’m a boy”, it was “I’m anything besides a girl.” As if it was a dirty word. The way boys say it on the playground. I imagined how I would feel if my girl body was a boy body. CORRECTION: I imagined how I’d feel if my chubby, sub par, mediocre, ugly, unwanted girl body was a tall, toned, tanned, desirable boy body, free to grow and move as it pleased. The trans boys in those videos… They loved to show before pictures – before they were Justin Bieber look alikes with flawless features – of their old selves with greasy hair and acne and curves in all the “wrong” places. They laughed at how ugly and embarrassing they looked in those pictures. Those pictures looked like me. 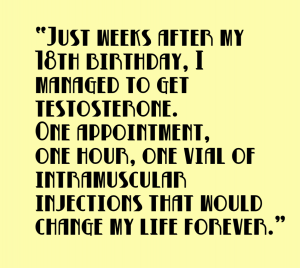 If I could never become one of the black and white faceless thigh gaps, then maybe I could become the beaming boy with the swooping hair who says his muscles really started showing up after T. He used to be a girl like me. I was meant to be a boy. I have always been a boy.

After “coming out” on tumblr, my followers skyrocketed. I was never super popular, but had around 3,000 at one point. Before, I couldn’t have had over 600. I got countless messages screaming “OMG VIN!!!! THAT’S SUCH A CUTE NAME!!!!” and “OMG, IM NB TOO!!! UR MY FAVE BLOGGER IM SO HAPPY U CAME OUT”

I created a queer Harry Potter network. It amassed hundreds of members, mostly trans. We didn’t take too kindly to cisgays.

My goal went from diet pills to testosterone. From UGW (ultimate goal weight) to transition goals. From fantasies about slicing off my thigh fat to slicing off my breasts. I bound them with duct tape. I couldn’t breathe. It made me panic, but I felt brave.

For the first time my parents couldn’t tell me I didn’t know what I was talking about, or that I was too young to understand, or that I had to be a certain way, because the world was backing me up. Teenage defiance became a revolution. I was Robespierre, and call out posts were the guillotine. The stage of Tumblr discourse was where I acted out my most primal urges, purged my deepest insecurities. I was invigorated. I had a purpose, an identity, a community, a goal. I had salvation. I had found. Fucking. Salvation. 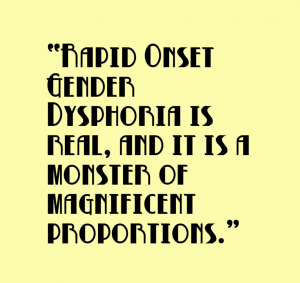 And so it went on for three years, until just weeks after my 18th birthday, I managed to get testosterone in August of 2016. One appointment, one hour, one vial of intramuscular injections that would change my life forever.

“Hmmmm,” I thought, “way easier and less gatekeep-y than I expected…”

After 15 months, a changed body, a broken family, and a twisted mind, I detransitioned February 2018.

And that is my experience. How it happened and what I was thinking.

It was both painful and invigorating. Neither the beautiful identity nor the ‘life saving medication’ eased my dysphoria or unhappiness. I truly believed I would have killed myself if I didn’t get hormones.

“Would you really rather have a dead daughter than a happy son?” I sobbed to my parents.

I have never felt more suicidal than right before I detransitioned.

Rapid Onset Gender Dysphoria is real, and it is a monster of magnificent proportions.

Shamelessly gender critical. There's no such thing as a pink brain, a lesbian with a penis or a gender fairy. Transitioning kids is child abuse.
View all posts by Lily Maynard →
This entry was posted in Children & Young People, Uncategorized, Women's Rights. Bookmark the permalink.