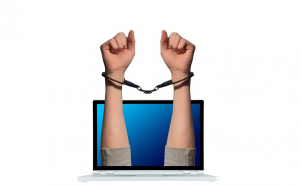 Last night I got myself a Twitter ban. I’d never had one before.  There were several windows open on my laptop, and a friend on facebook had posted a picture of Shon Faye’s Twitter feed (see left). 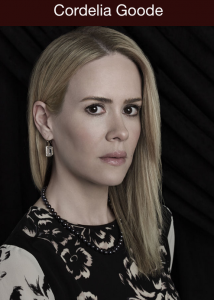 Shon & I have a bit of history, I point out that he’s a man in my article Transwomen are Men, he has, er…  blocked me.

Shon is famous in feminist circles for telling Lavender ‘enjoy your erasure’ and generally telling women how to woman.  I’m no more a fan of his than he is a fan of mine.

That line and the accompanying pout! Had he come straight from watching Buffy? I didn’t realise at the time that he was referencing Cordelia Goode from American Horror Story, or that he labours under the illusion that there is any resemblance between himself and her. 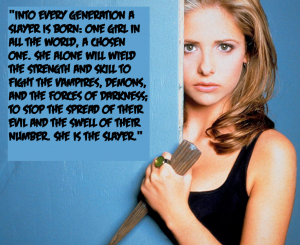 Buffy, of course, is a teenage vampire slayer, star of a cult TV series that bridged the 20th and 21st centuries. Episodes started with this opening ““Into every generation a slayer is born: one girl in all the world, a chosen one. She alone will wield the strength and skill to fight the vampires, demons, and the forces of darkness; to stop the spread of their evil and the swell of their number. She is the Slayer.”

So I snorted, clicked to Twitter and posted the screenshot accompanied by this fairly uninspired Tweet: “I think Mr Faye has got his modern Wicca and his Buffy the Vampire Slayer mixed up!” 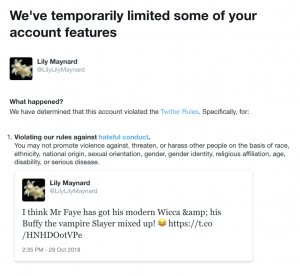 Well, I’ve never been in Twitter jail before. Better women than I have been forced out entirely, of course, Venice Allan and Posie Parker spring to mind, and numerous others are much missed, or have had to temper their speech in order to stay on a now watered-down platform.

If you look at the wording, you’ll see that I was told that I had violated the rules against hateful conduct. Evidently I had promoted violence against, threatened or harassed Faye with my Tweet.  Well, this is of course absurd. Faye is wealthy and famous with a platform in various mainstream publications and 36.1k Twitter followers, I am a middle aged housewife who has a free wordpress blog and not even enough Twitter followers to get a ‘K’ after them on my profile page.

Like a naughty schoolchild I was told to remove the Tweet and a 12 hour countdown would start. So I sighed, and I did.

My ban up, I logged back on, started a Tweet and then was immediately told my account was blocked again. Argh! This time for two Tweets from seven months ago, in which I informed Amnesty International that Faye was a man. “Remove the Tweets” commanded Twitter. I did.  This happened several more times, each involving a Tweet referring to Faye. So far I’ve removed more than half a dozen, spanning the last 9 months. I was so surprised I didn’t even think to take a screenshot of them all. This time there was no 12 hour ban, but a warning that if I did it again, I might be banned for good. 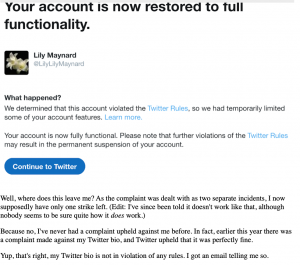 Well, where does this leave me? As the complaint was dealt with as two separate incidents, I now supposedly have only one strike left. (Edit: I’ve since been told it doesn’t work like that, although nobody seems to be sure quite how it does work.)

Because no, I’ve never had a complaint upheld against me before. In fact, earlier this year there was a complaint made against my Twitter bio, and Twitter upheld that it was perfectly fine.

Yup, that’s right, my Twitter bio is not in violation of any rules. I got an email telling me so. 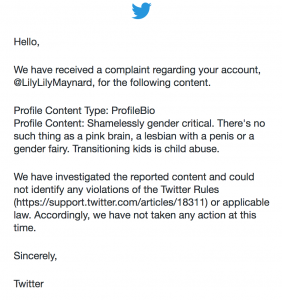 There have been other instances as well, where a complaint against me has not been upheld.  There was a complaint the time I posted a picture of a bloke manspreading on the train – that tweet resulted in a man sending me a photo of a dead body with it’s head smashed in by a brick, accompanied by the words ‘no such thing as a pink brain, eh?’

In the last week there have been several complaints against me which haven’t been upheld. Obviously my account is being targeted.

However, I take very seriously the accusation that anything I say or do is ‘hateful’. I wrote a post called ‘Gender is Harmful, my Views are not Hateful’ about this a few weeks ago after a journalist suggested that was the case.

I understand and respect that Twitter is a free platform. Free as in you don’t pay for it. But there is one rule for some and a different rule for others. Men cannot become women. I was put in Twitter jail for speaking the truth. I will not use ‘she’ when speaking about a man.

I may well avoid using pronouns altogether if that’s what I need to do to stay on Twitter, but will that be enough when speaking the truth is construed as hateful? At what point does it become pointless to be there at all?

In the meantime, I’ll see you on Twitter. Hopefully.

So, the strangest thing. At least 2 women have received emails from Twitter giving them an update on having reported my account. Both these women say they DIDN’T report my account. So someone has somehow reported me from someone else’s account. On more than one occasion. I have tried to contact Twitter support but their automated system makes it difficult to discuss the issue. One of the women also tried to contact them but was unable to get her point through the automated system.

Another person contacted me later today, saying they had received a similar email 2 weeks ago. They also say they had not reported my account. That’s at least three people who have received an email from Twitter, confirming something they didn’t do. 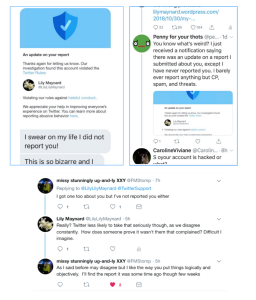 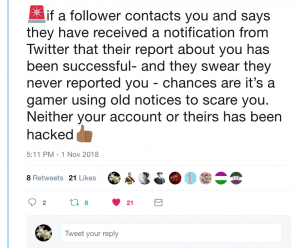 So it looks as if things are a little more simple than I thought. There are people out there who can send you emails and make it look as if the email originates from somewhere else. Head spin.

“If you are suspended by Twitter for any length of time – Please, please don’t tell everyone by tweeting the fact when you return. Because if you do you will be targeted by some unpleasant groups who will then try to get you banned permanently.”

My account is still being reported by people with nothing better to do. 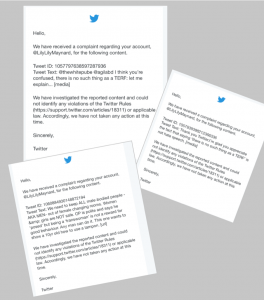