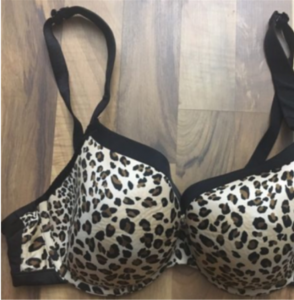 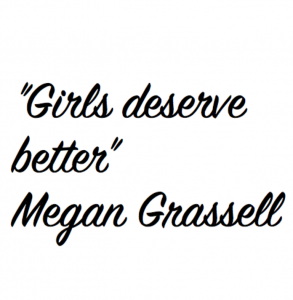 “Before a fruit is fully ripened…  it passes through several shades of yellow. Those yellow stages take time, but they are what will eventually create a beautiful berry.”

So reads the ‘about us’ section on the homepage of the Yellowberry bra website, where Megan Grassell writes movingly about her reasons for setting up Yellowberry.  Seeing her 13 year old sister trying on a leopardskin push up bra and realising there were few real alternatives for growing girls, she decided to found a company making bras that were comfortable and practical & didn’t put pressure on girls to ‘grow up so fast’.

We support girls through each stage of their journey to become confident and extraordinary young women….

My team and I are here today with the goal to support your daughter, both literally and figuratively, as she grows up at her own pace.

My goal was for my sister Mary Margaret, and other girls her age, to feel confident in whatever they wear.”

Ms Grassell has done a great job of this. She started Yellowberry at just 17. She has won awards for it: been mentioned in TIME, Forbes & The New York Times. Her bras are now available all over the world. She should be proud.

Until yesterday on Twitter, when bra-gate broke. Someone, ostensibly a social worker, contacted Yellowberry complaining that their products were ‘too gendered’.

A Yellowberry worker sent out this jaunty reply:

“Sorry, Jillian. Our market is strictly tween/teen girls. We don’t feel that growing boys need bras. Thanks for your input and have a Happy New Year!” 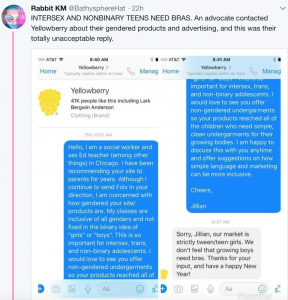 The response from mothers was swift: 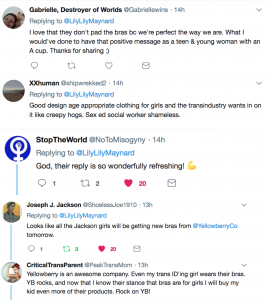 But before the happy parents could get out their cheque books, Ms Grassell panicked and Yellowberry caved.

Ms Grassell responded with effusive apologies, assuring the OP that Yellowberry products weren’t just for girls after all.  They are suddenly now ‘for anyone’ and Yellowberry’s aim is to make ‘every young person feel comfortable’. 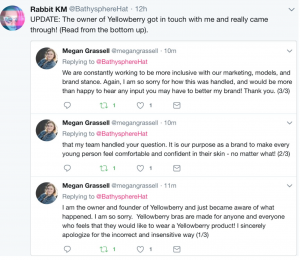 This massive turn around was not enough for the translobby however, who said the employee who sent the polite and perky reply had made the brand ‘look bad’ and called for her to be sacked.

Ms Grassell was keen for her apology to reach the strangely elusive social worker who had made the original complaint, and apologised repeatedly that one of her staff had DARED to suggest that bras were for girls.

Ms Grassell’s email address is there, for anyone who would like to email her, supporting and praising her previous stance, or assuring her that yes, bras actually are for girls and it’s ok to say so; that and she is right about yellow berries and yes, girls do need non-sexualised products made especially for them, and no, she should not feel obliged to pander to men creepy enough to demand she make her products more ‘inclusive’- and that they hope she will support her employee, who did nothing more than tell the truth.

It is interesting to note that big clothing companies, who also market underwear and other clothing directly at girls and women, have not been targeted. Far easier to intimidate and bully a small philanthropic business, run by a young woman who is barely out of her teens herself.  Why approach Yellowberry? Why not Target or NEXT ?

I wonder what CEO of Marks and Spencer, Steve Rowe would say, approached with such a message? Or Paul Marchant, CEO of Primark? Or Lord Wolfson, CEO of NEXT? Or Brian Cornell, CEO of Target? Would these men (below) be replying to such criticism saying “I’m so, so sorry..” ?  Do you see a pattern here?

Who and where is this elusive ‘social worker and sex-ed teacher (among other things)’, who recommends bra companies to so many parents and who wrote to Yellowberry in the first place?  This ‘advocate’ so concerned with the welfare of non-binary teens? This social worker with nothing better to do than harass young women? Do you smell bullshit too?  This is just more shameless bullying of women.

Some of the Twitter responses to Ms Gressell’s backdown are below. 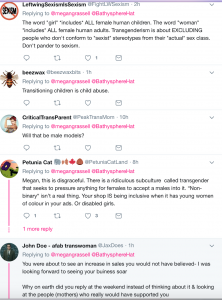 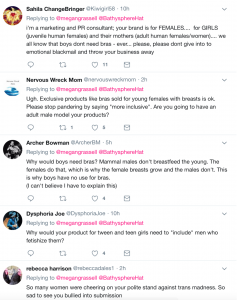 Several things strike me as being of note at this point.