who at the point of application identifies as a woman 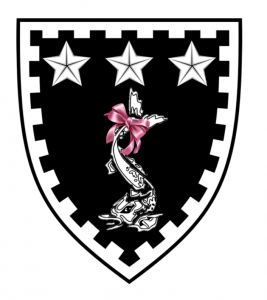 Cambridge University’s women-only college, Murray Edwards, is not a college steeped in ancient tradition: it was founded as late as 1954 to to address the fact that Cambridge had the lowest proportion of women undergraduates of any university in the UK, shortly before the establishment of Cambridge’s women-only mature-student college, Lucy Cavendish (1965) and nearly a century later than their more stately sister Newnham in 1871. It’s a well-respected college, tough to get into and much-beloved by its aluminae.

There are 31 colleges at Cambridge, and three of them are women-only.

The last Oxford college to go co-ed was St Hilda’s in 2008. Most of the others went co-ed in the 70s and 80s. Those three women-only colleges at Cambridge are the last remaining in the UK. And now there are two, one of which is for mature and post-grad students only. So if you’re a young woman wanting to study a degree at a women-only college, for whatever reason, you’re now left with just one to apply to. Good luck with that.

While all three of their last-remaining-all-female colleges will already accept applications from men who apply under the Gender Recognition Act, Murray Edwards has now announced it is generously accepting applications based on the grounds of gender identity.  From anyone in fact ‘who at the point of application identifies as a woman’. Good grief, the awkward grammar alone is painful. 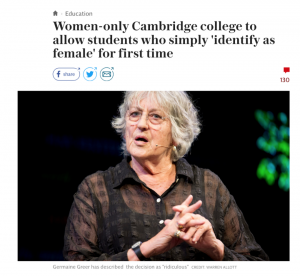 You can read the article here.

Germaine Greer has described the decision as ‘ridiculous’ : well of course she has. Who in their right mind wouldn’t? There is a wonderful irony in the fact that it was Charles Darwin’s son, Horace, who gifted his family home ‘The Orchard’ to the now-named Murray Edwards College in 1962. Is Charles turning in his grave? Do we really still need all-women colleges?

St Hugh’s College, Oxford, which first admitted men in 1986, has recently come under fire for having an all-male team for University Challenge. Men were first admitted to the college in 1986. Program host Jeremy Paxman observed:

“We could be forgiven for thinking they’d rather taken it over.” 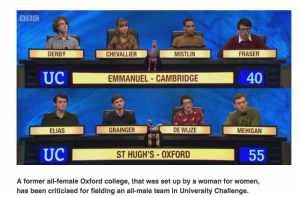 Not all young women were over the moon about this, one citing it as part of her reasoning in choosing Lucy Cavendish for study. A man was quick to mock her concerns:

So who are the snowflakes in this current situation? The men who are so determined to hoist themselves into women’s spaces that they would happily demand entry into an all-woman college?  Or the females who dare to point out their discomfort when persons-with-penises take over their spaces?

I saw Jessica Swale’s wonderful ‘Blue Stockings’ at the Globe Theatre in 2013 and read the play only a few months ago, so it is fairly fresh in my mind how hard women have had to fight for a university education. They didn’t choose to identify into that difficulty.

You can read a fascinating introduction to the problems facing young women who wanted an education at the time here: it’s also a link to purchase a copy of Swale’s play, which I highly recommend.

In Michael Billington’s review of the play he said:

“Jessica Swale’s first play leaves you astonished at the prejudices the pioneers of women’s education had to overcome” and goes on to add “What is appalling is the hostility the women encounter, not least from male undergraduates who either bully or patronise their female contemporaries”

But yeah, times change, as Stevo H points out; we move on, that was then, this is now, who needs that crap anymore, eh? After all, there are no men-only colleges left. What possible reason could a woman have to want a study space free from men? Such snowflakery!

Let’s assume for a minute that I’m with you on that. I’m not, of course, although  I wouldn’t have wanted to go to a women-only college myself. But let’s assume I am & we all agree that women’s colleges are no longer needed.

What troubles me the most is that Cambridge isn’t just saying ‘What the heck, let’s go co-ed!’  The decision is dressed up like some great progressive step forward.

The fact that the young women at the college will have to take their part in reinforcing some man’s illusion that he is female- yet still pretend that they’re in a female only space- is startlingly sexist and regressive.

Yet Kate Litman, women’s officer for the college claims that students are “thrilled” by the news.  Not just ok with it, but THRILLED! I can just imagine them jumping in the aisles of their lecture halls! All filled with a warm, gooey feeling inside; a rising excitement and anticipation of penises inside their hitherto penis-free spaces.

And, you know what? I call bullshit. I don’t believe that they are thrilled. There are reasons why women apply to female-only colleges. They may be multitudinous and complex reasons, but one thing we can be pretty damn sure of is that a woman who applies to a women-only college does it FOR A REASON and that reason is not to play handmaiden to a man so enthralled to gender stereotypes that he thinks he can have the foggiest idea of what it is like to be a woman.

There are 130 university colleges in the UK and only three of them are women-only. What kind of arrogance would demand to be allowed into such a space?

That awkward question is covered by the rallying cry ‘But transwomen are women!’ which is designed to put paid to any further discussion.

Ms Litman sounds as if she has partaken of afternoon tea with the gender fairy, or at very least swallowed a GIRES publication, adding “it is absolutely right that all women should have the chance to study here, no matter what gender they were assigned at birth.”

And look! Quelle surprise! GIRES have made a statement too, observing darkly and somewhat ominously that they welcome the decision “to respect and support all gender diverse people”. Because of course, not letting men-who-call-themselves-women into a women’s college would be disrespectful and unsupportive and – wait for it – TRANSPHOBIC.

And there we have it, in a nutshell. Nobody wants to be called transphobic now, do they?

Shamelessly gender critical. There's no such thing as a pink brain, a lesbian with a penis or a gender fairy. Transitioning kids is child abuse.
View all posts by Lily Maynard →
This entry was posted in Opinion Pieces, Women's Rights. Bookmark the permalink.