“For me, trying to convince myself that I am or could be a woman would be the final sign I had drifted completely into insanity.” 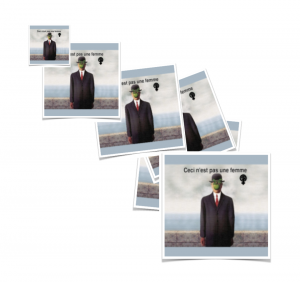 “You can play the part of a woman, but you cannot be one unless you were born one. A woman is an adult female. Males are not and can never be females.”

I’m so moved by this raw and honest article by transsexual Jenn Smith, that I think it deserves a repost all of its own. The article is in two sections which both stand alone as important works: the first is a horrifying but almost matter-of-fact autobiographical account of his own traumatic childhood and how he believes it affected the way he presents and identifies.

The second deals with the current trend of transitioning small children & teens, and why it is generally a terrible idea. In it, Jenn asks the important question:

“Instead of moving kids towards medical transitioning, why not do everything possible to encourage them to accept their biological sex and body, since that is reinforcing reality?”

It seems strange that we even need to ask that question. Surely it’s a no-brainer?

A child who has to spend their whole life trying to play out a role that they aren’t physically designed for; a child who invests huge amounts of time and concern into whether they’ pass’ or not; a child constantly worrying if they’re going to be ‘misgendered’ or ‘caught out’ is not a child who can focus on the day to day wonders of the world and the joys and woes of regular human interaction. A child who can live in the body they were born in is a child who does not become a lifelong medical patient in a quest to become something they are not.

Twitter ‘armchair activists’ often say to me in disgust, “You’d rather have a gay child than a trans child!” Well, yes, I would. But for the reasons above, not out of some deep-seated loathing for trans-identified people.

“Young people should be encouraged to accept their natural bodies and selves. Children are prone to whims and flights of fancy, which is why we do not let them get tattoos or vote in elections, because they are not mature enough to make informed decisions that can seriously impact their lives or the lives of others.”

There are so many parts of Jenn’s article that I could quote that the best thing just seems to be to plant the link here for you to read yourselves. While you read it, bear in mind that Jenn  is on the receiving end of much hatred from the adult trans-identified community for daring to speak out as he does.

“As I began my campaign to dissuade schools and parents from allowing gender identity changes in children, I was immediately attacked by what I call “trans cult activists,” … They claimed I was too old and ugly to be transgendered and not feminine enough… They suggested the fact I knew I was really a male proved I was not really trans but in fact just a pervert, and even suggested I should kill myself…”

Thank you, Jenn, for being brave and honest enough to speak up, for caring about the welfare of children and for writing this article.

EDIT: The links to Jenn’s articles are no longer active.

3 Responses to “For me, trying to convince myself that I am or could be a woman would be the final sign I had drifted completely into insanity.”