Kool-Aid for Kiddies – teaching little ones about the gender fairy 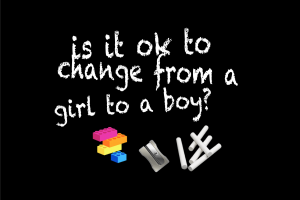 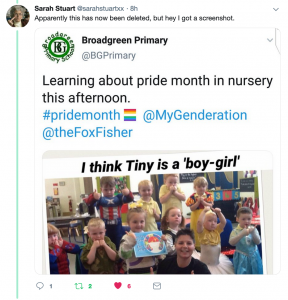 “Look at this,” a friend sent me via WhatsAp this afternoon. “This nursery is teaching kids about trans stuff, they’ve even tagged in Fox Fisher. Why on earth would a four year old need to know about that?”

I looked at the link she had sent me and saw that, although Sarah Stuart had taken a screenshot, the school had deleted the original tweet (left). This in itself seemed strange. After all, if they thought the lesson was so great they put it on their Twitter feed, why would they delete the tweet?

The book the children are holding is ‘Are You A Boy or a Girl?‘  written by Sarah Savage and Fox Fisher, who are both transgender. It stars the non-binary Tiny, who claims to be neither a boy or a girl. Savage says of the book:

“The main message is about identity and that you can be whoever you want to be. If a child feels they don’t identify with being a boy or a girl there is this wonderful space in the middle that they can be in.”

Strikes me as pretty confusing for a pre-schooler. Of course we can’t be whoever we want to be. While self-encouragement and belief are admirable, certain wishes cannot be fulfilled. A person with one leg cannot choose to grow another one. Someone with a terminal illness cannot choose to cure themselves. We don’t get to choose whether to be a boy or a girl or something in the middle. How about we just teach kids about personality and stereotypes; respect and kindness? 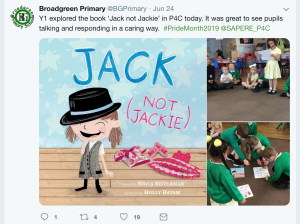 It appears that not only is Broadgreen Primary School in Liverpool a Stonewall Champion, with nursery age kids learning about the joys of being non-binary, but the year 1 pupils – that’s five and six year olds – spent  the morning of June 24th studying a book called ‘Jack (not Jackie)’.

‘Jack (not Jackie)’, according to its Amazon blurb is ‘a heartwarming picture book’. In it, Jackie’s unnamed sister notes with concern that Jackie is not interested in twirling like a forest fairy, but wants to play with mud instead. Baby Jackie sports a bow in her hair but pulls her ribbons out as soon as she can. She won’t wear dresses, instead she flies around in a superhero cape.  She puts on her dad’s clothes and mimics his gestures. Older sister likes her hair ‘swingy’ but Jackie asks mum to cut off all of hers. Jackie’s sister is horrified & shouts at her mum to stop because ‘now Jackie looks like a boy‘.  Jackie responds by saying “I am a boy’. Mum is fine with this, Jackie’s sister realises that’s fine too and her ‘heart becomes bubbly again‘.

I kid you not. But don’t trust me, you can read the whole thing for yourself here on Amazon. where it receives this somewhat disconcerting 5 star review from a ‘non-binary’ mother who has not one, not two, but THREE transgender children of her own. 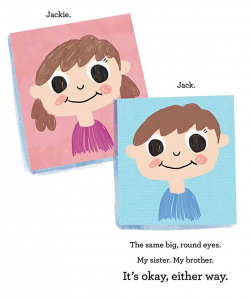 This ‘sweet story of change and acceptance’ advocates for anything but acceptance. The message is very clear – a girl who doesn’t want ‘swingy’ hair and likes superhero capes and mud is quite probably a boy.

Why would teachers be putting it into the heads of children that liking certain things means they are a boy or a girl? Well, if your school is a Stonewall Champion, it’s par for the course.

This is being fed to five year olds under the guise of inclusivity. It is not inclusive and it is very much not okay.

It is sexist as hell, and there is nothing progressive about stereotyping children. 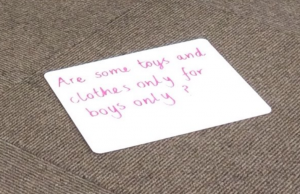 We can see that the work cards the children at Broadgreen Primary use ask another question.

“Are some toys and clothes only for boys only?”

We can safely presume that the correct answer to that would be ‘no, of course not, you can play with what you want‘ but this is direct contrast to the message of the book.

The message of the book is quite clear: Jackie does not like certain toys, clothes and hair styles, therefore she is a boy. 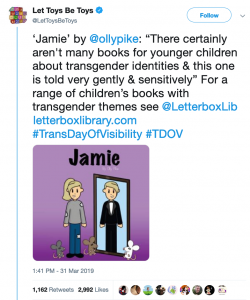 The  teachers of Broadgreen Primary are not alone in their ability to believe that clothes and toys should on the one hand not be gendered, but on the other hand a child’s preferences are reason enough for transition.

The organisation Let Toys Be Toys who ‘petition retailers, booksellers and manufacturers to sort and label toys and books by theme or function, rather than by gender‘ caused a kerfuffle earlier this year when they tweeted about ‘Jamie’, another  book where a child’s hair and clothes preferences are portrayed as reason enough for transition.

“As one of the co-founders of Let Toys Be Toys I am utterly disappointed that you are now promoting the ideology which says that a girl who wants short hair, likes fixing things and isn’t into sparkles and dresses is ‘in the wrong body’ and must be a boy. Heartbroken.”

If you’re thinking that none of this makes sense, you’re right. It doesn’t.  What possible reason is there to tell a boy he is a girl or a girl she is a boy? It is possible to treat a distressed and confused child with kindness, love and compassion without telling them that not only should they have been born the opposite sex, but that it is possible and desirable to try to change themselves to better fit in with the sexism and stereotyping that is so rife in our society.

“Jackie. Jack. The same big round eyes. My sister. My brother. It’s okay either way.” concludes the little girl in the book.

But in what way is it okay? 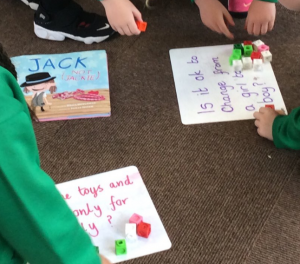 ‘Is it okay to change from a girl to a boy?’ the children are asked, after reading the book.

There are those who would compare books like ‘Jack not Jackie‘ to the 80s ‘Jenny Lives with Eric and Martin‘, a 80s children’s book by Susanne Bösch, which told the story of a child who lived with her two gay dads. The tabloid press of the time was outraged at what it called gay propaganda. It is disingenuous to suggest that these modern child transition books have anything in common with Bösche’s work. Telling a girl that she is a boy is very different to telling a child that two men or two women can fall in love and raise a child. Telling a girl that she’s a boy can cause all sorts of problems for the child- and it isn’t true.

In what way might Jack’s new life as a boy not be ok? Well,  ‘Jack (not Jackie)’ doesn’t deal with the mental stress caused by maintaining the levels of cognitive dissonance necessary for a child- and the adults surrounding her- to believe she’s been ‘born in the wrong body’. It doesn’t deal with either the complexities of living by stealth or the issue of being acknowledged as ‘trans’ rather than the ‘preferred gender’ a child was hoping to magically attain. It doesn’t deal with the inevitable arrival of puberty and the blockers needed to attempt to maintain the delusion. It doesn’t deal with the potential side effects of puberty blockers, off-label drugs that were originally developed for men with end-stage prostrate cancer. It doesn’t deal with the issue of compromised fertility. It can’t deal with the potential problems puberty blockers might present for Jack’s cognitive development, because that hasn’t been studied yet, although there are suggestions that the IQ of girls on testosterone may drop by several points.  If she persists, and most kids put on blockers do persist, the  cross-sex hormones she will be given at age 16 will result in sterility, as her gametes will not have not developed.  Loss of sexual function is another possible side effect. Testosterone has a variety of side effects and Jack has a fair chance of developing acne, anger issues, weight gain or male-pattern baldness at a young age. Nor does the book address the potential medical and psychological complications of elective double mastectomy or attempting to construct Jack a penis by skinning her forearm or thigh to create a tube of flesh that can be attached to her groin.

Instead, the children of Broadgreen Primary are asked ‘Is it ok to change from a girl to a boy?‘. Is it ok. What is meant by ‘ok’?

You might as well ask if it’s ok to become a unicorn. Is it ok to go and live in another dimension? Is it ok to grown a second head? These are not proper questions because they are dealing with fantasy situations.

Children this age are susceptible to believing all sorts of things that adults tell them.

But they are being lied to. Because at the end of all this, Jack will still not be a boy.

And we can only hope that she will be ok.