Butterfly 2 – in search of puberty blockers

Episode 2 of ‘Butterfly’ hit our screens last night, and what a whirlwind it was. As the opening credits rolled the self-described  ‘truthful and powerfully beautiful drama’ opened with a scan of Max’s dressing table: moving past the snarling dinousaurs to the place where wide-eyed, pastel-maned ponies mingled with lipsticks and glitter lamps, just in case we had forgotten that all is not ‘normal’ in the Duffy household. 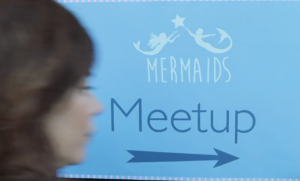 Dropping all pretense of being much more than a glorified advert for Mermaids, the first scene showed Vicky & Stephen, Max’s parents, attending a Mermaids meeting where the host tells them how her now-daughter currently lives in Italy and is ‘dating a gorgeous Italian’. Well, that’s certainly a step in the right direction: what more could a ‘real’ girl want? A career perhaps? Validation outside of her relationships with men? Of course not. This is a world where stereotypes are not just revered but aspired to.

“Listen to your child,” she tells Vicky and Stephen in a condescending whisper. Vicky finds the meeting ‘really encouraging;’ Stephen finds it ‘difficult‘.
I’m already reaching for a large gin and tonic. 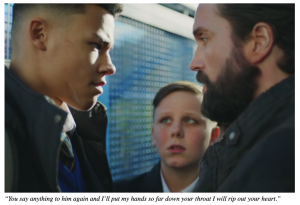 On discovering Max is still being bullied at school, Stephen approaches the bullies in the school yard, and tells them “You say anything to him again and I’ll put my hands so far down your throat I will rip out your heart.”

Totally inappropriate and just a tad over the top, but fairly understandable under the weight of all that testosterone. This is a bloke who even hoovers the carpets in a manly manner. You can bet it will backfire on him in Episode 3. Nonetheless, personally I applaud his ability to shut the bullying little blighters up: my hubby is horrified.

“We’re as good as any other parents,” says Stephen, defensively, when Vicky’s mum accuses the family of ‘paper(ing) over the cracks’.

“Are you?” throws back wide-eyed Lily, who in time-honoured teenage tradition seems to think good parenting can be measured by immediate capitulation to every whim, “You’re still not giving him what he wants.” Preferred pronouns are forgotten in the heat of the moment.

Later? The next day? The scenes change so fast it’s sometimes hard to tell, as the script-writer rushes on to the next event. Stephen- or Nigella as Vicky oh-so-amusingly calls him on this occasion- is in the kitchen again. “Where’s Max?” she asks innocently, and we know trouble is on the cards.

Max’s whereabouts forgotten for a minute, Vicky & Stephen almost kiss, but Lily bursts in: she needs a wee and Max has been in the bathroom for half an hour. Alarm bells ring, everyone dashes upstairs and Stephen breaks down the door with a manly kick. Max is in the bath with a piece of broken glass, threatening to cut off his penis. Stephen takes the glass off him and accidentally cuts himself: camera zooms in on the blood.

Vicky wraps Max in a towel, crying, “They said this would happen, didn’t they? We’ve got to do something!”
“We will, son, we will.”
“We will MAXINE!” glares Max from his mother’s arms, and I half expect Ave Satani to start playing in the background. 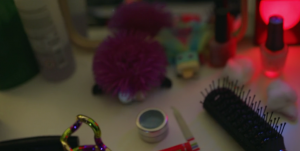 Camera pans over pink-lit dresser adorned with pompoms, nail polish, hairbrush & mirrors. Max is sleeping, clutching the Mermaid pendant which dad untangles from his hands & places on a different dresser, one sporting a dinosaur, a toy car and a games console.  The camera pans slowly into a close-up on the pendant as the sun rises, the room brightens, birds sing and daylight floods the room. 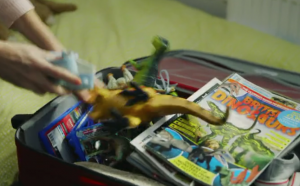 Cut to Vicky, packing a suitcase full of all the ‘boy things’ in Max’s  bedroom and shoving it under the bed. The family don’t seem to be able to make their minds up. Either he can’t have any ‘girl’ things or he can’t have any ‘boy’ things. No wonder he’s confused. The last thing she picks up is a tiny pair of blue baby shoes from the shelf. These too must go – what self-respecting girl would ever have owned a pair of blue shoes? The suitcase packed away, Vicky collapses hyperventilating by the bed.

They visit the head teacher who is worried Max may be just going through a phase and talks about pencil cases and netball.

Poor bloke, he’s trying so hard and he just ends up sounding kinda creepy. When he runs back to relative sanity in the arms of ex-girlfriend Gemma, part of me doesn’t even blame him for being a love rat.

Rather than this raising safeguarding alarm bells- it’s quite definitely the weirdest thing Stephen has said so far- this seems to convince the headteacher, who promises to send a letter to Max’s year group over half term, saying he’ll be coming back as Maxine. 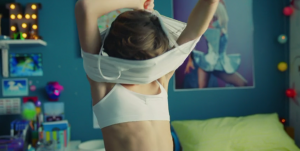 The camera cuts to Max, who is getting dressed  in a training bra, tights, pink knickers and frills.  His hair is curled and he is painted up with pink lipstick, blusher and eyeshadow by his mother and sister. His eyebrows are now perfectly plucked and sculpted: adorned with the trappings of femininity he looks not entirely unlike a short-haired Brooke Shields in ‘Pretty Baby’.

By this point I’m looking round the room for a suitable receptacle should I feel the need to throw up.

“She will,” declares dad, and with the blessings of the patriarchy upon him, Max is reinvented as Maxine, and off to school he goes.

“Will I be a proper girl?” he asks, unconvinced, arriving at school.
“Just be yourself,” advises Lily, oblivious to the irony that being himself is the one thing that Max is not allowed to do.

Not at any point in this entire soap opera has anyone suggested to Max that he can like the things he does and still be a boy. 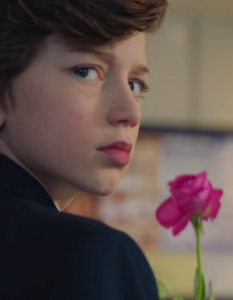 School starts. The girls love him- one gives him a rose for ‘grace, happiness and gentleness‘  and they send him messages on social media saying ‘you look great’ and ‘you are so brave’. The boys are less kind. One is quite rightly sent from the room for calling Max and his new friend ‘a tranny and a stick insect’.

The teacher is concerned about Max and starts “Maxine…”

Maxine is calling the shots now, although in most schools a girl wearing that much make up would be told to ‘go wipe that muck off your face.’

Max makes a new friend: the girl who gave him the rose is an anorexic who shows him her self-harming scars. The storyline takes care to emphasise that there is a big difference between the two children. She is ill, Max is not.

They put on some pop music and dance and sing along. Much wiggling ensues. Because they are girls, obvs.

The family meet up with grandma, who is angry to see Max sporting a pink hoodie & shoes and, astonishingly, even more pink make up than in previous scenes. Lily and Max dance on the platform while Vicky and her mum talk. Grandma accuses Vicky of spoiling Max and cruelly spits out, “You’re no grandson of mine,” allowing Max the snappy comeback, “I know I’m not.”

The family gets an appointment at the gender clinic after five months wait. Wearing pink shoes and a short skirt, Max arrives at the Ferrybank with his parents, but all does not go as Vicky hopes.

Stephen expresses his reservations, and Max tells a clinician, “Mum says there’s something I can take,” adding, “It was Lily’s idea. She made me do it,” and later, “I don’t want them to stop loving me.”

The clinic ‘don’t think it’s helpful to focus all our attention on physical intervention’ and refuse to prescribe puberty blockers despite Vicky’s insistence, instead advising ‘watchful waiting’ and suggesting Max finds ‘more fluid ways to embrace your gender’.

Vicky freaks out.“She can’t wait! Wait until she’s been through all that agony and hell and she ends up in a man’s body? Offer more counselling when she tries to commit suicide again?”

She turns to Stephen, “It’s your fault!”

Max sits next to his mother, bubblegum-pink lips unmoving; beshadowed eyes unblinking, throughout this ghoulish prophecy.

“They’re not gonna hand them out like bloody sweets!” shouts Stephen, who has done his research & knows that most kids desist post puberty if they aren’t given blockers. “These are the experts!”

“I’m the expert!” shouts Vicky, who doesn’t even seem to have done a quick Google on the potential problems involved with prescribing blockers to pre-pubescent kids.

Transgender Trend yesterday published a comprehensive article in response to this episode, entitled ‘They Look Normal’, exploring the origin and effect of ‘blockers’ in depth and discrediting the ‘harmless and reversible’ myth. It’s such an excellent piece that I don’t need to go further into the implications here. Instead, I encourage you to read the article (link above) for yourself.

If Max’s mother gets hold of blockers for him he may well ‘pass’ as a girl, but if he goes on to take cross-sex hormones he will almost certainly end up sterile and with little or no libido. Is this less important than how he may look? 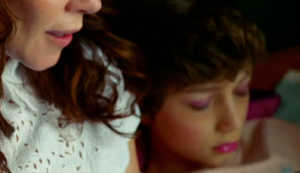 “I don’t think I can trust you any more,” Vicky tells Stephen.

Max goes to bed without taking his make-up off.

The next day Vicky goes back to Mermaids where she is told her GP is unlikely to prescribe puberty blocking drugs and advised not to buy them online, but that there are ‘other options’. A trip to a doctor in Boston would do the job, she is told, but would cost thousands of pounds. Vicky says she’s starting a business but is told ominously, “Vicky, you need the money now.” 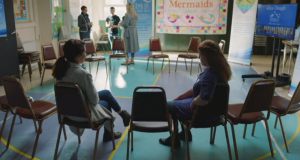 Taking a cheque her mother had given her to bolster her new business, Vicky decides to head for America without telling Stephen or Lily. She dashes home and grabs Max, ignoring Lily who is desperate to talk to her.

Hastily removing his earrings and make up, Max and Vicky rush to the airport, as back home Lily is beckoned into the dark-doored, gloomy-looking house of a boy from school.

Cut to Vicky and Max stepping out of a taxi, outside a state-of-the-art glass-fronted hospital. The sky is blue and everything is clinically clean.

Their luggage has disappeared but Max’s make-up is back. Vicky takes his hand and smiles.

Butterfly is a 3 part drama shown in the UK on ITV. All stills in this blogpost are screenshots from episode 2.

5 Responses to Butterfly 2 – in search of puberty blockers