When is a mermaid not a Mermaid? 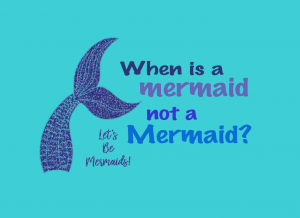 This afternoon it came up on my Twitter that a bloke called Andrew Carter had posted his concern over a ‘fake’ Mermaids account that has been set up.

“Transphobes set up a fake @Mermaids_Gender account to trick vulnerable children into conversion therapy. Report @mermaidsgender into oblivion.” he tweeted.

So I had to check it out. The account he refers to is called @NOTmermaids_gender and its header banner reads ‘Mermaids are not real‘ suggesting that genuine confusion with the pro-child-transition organisation Mermaids is highly unlikely. What seems even more unlikely is that any passing vulnerable child would be ‘tricked’ into conversion therapy through viewing the account.

The obsession with the idea that telling children that it’s not possible to change sex is somehow ‘conversion therapy’ is an odd one, which doesn’t bear much scrutiny. It seems fairly obvious that what is actually conversion therapy is attempting to turn an (often gay) child into the opposite sex via stereotypes, medication and surgery. But I digress.

If Carter has genuine concerns about vulnerable children lurking on Twitter, a better use of his time might be campaigning to get the numerous paedophile accounts removed. But I digress again. 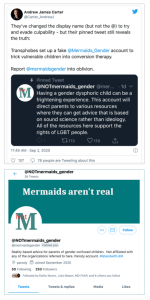 The NOTmermaids account is just a baby, having joined Twitter only yesterday. In the score or so of tweets there are links to a couple of articles about the harms of puberty blockers, Lisa Littman’s announcement that she will be starting a non-profit studying gender dysphoria and a link to the Bayswater Support Group for parents of trans-identified kids. There’s also a link to TRans Educational Voices, a group of trans-identified adults who believe children should not medically transition and a link to purchase Abigail Shrier’s book ‘Irreversible Damage’.

The use of a ‘z’ rather than an ‘s’ in a tweet containing the word ‘organisation’, plus the fact that the link to Shrier’s book leads to American Amazon, suggests the account is American in origin. Nonetheless, Mermaids supporters have already accused UK organisation Transgender Trend of starting the account.

“This is Transgendertrd, not Mermaids_Gender, please report it for a false account,” tweeted Kate (she/her). 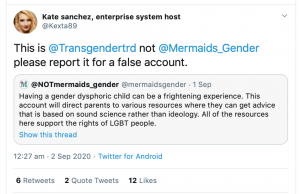 “It’s the trends people obvs. All the links are to their propaganda.” tweeted Ellie (pan/she/her) despite the fact that NOTmermaids has retweeted just one TGT comment to date, their statement re the Keira Bell case: “we are very happy to announce that the judge in this case has given Transgender Trend permission to intervene in support of Keira Bell”.

Why an established and respected organisation like Transgender Trend, with over 23k followers and a founder who was shortlisted for the John Maddox prize, would feel the need to start an anonymous Twitter account to share gender critical resources is not a question that seems to bother the pronoun posse. After all, there are reputations to be shredded and time waits for no Enby.

Did Transgender Trend become hysterical at the accusation? Of course not.

Despite the temperate nature of the ‘parody’ account- which has so far tweeted nothing that hasn’t been shared many times before on social media- Mermaids seems to have got its tail in a spin.

“We are aware of the latest attempt to misrepresent us.” tweeted Mermaids. “We call on @TwitterSafety to act without delay. Thank you for reporting them too.”

In a reply to a follower’s urge to ‘stay strong’ they added, “we’ll stay strong, just like our service users. They’re the best inspiration any of us could wish for.”

The call to arms had been heard and the pronoun posse were ready. Mass reporting was taking place. The tweets were flying, each one more hyperbolic than the last.

“..have we got the names of those behind this hateful account yet?” warns one keyboard warrior darkly, “This will be taken further.”

Sauce for the goose 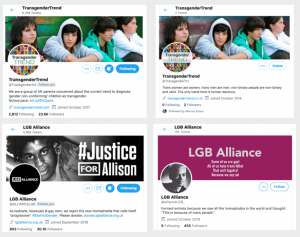 What transactivists seem to have conveniently overlooked is that pro-child-transition groups and/or their supporters frequently set up fake twitter accounts pretending to be  organisations- such as LGB Alliance and Transgender Trend (see left).

This is ok, one supporter tweeted, because evidently “LGB Alliance is a Hate Group, Mermaids is not”.

Smaller fish are not exempt from this misrepresentation; there was a fake Lily Maynard account for a while, with ‘I am a happy transwoman’ in the bio. Yawn.

This is all pretty much par for the course, Twitter is, after all, a playground, an echo chamber and a free-for-all. But what happens when the stakes are upped and the misrepresentation is taken outside social media? 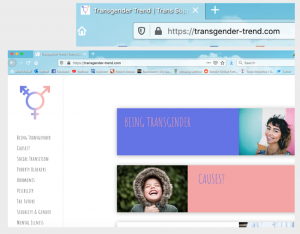 There is, for example,  a ‘fake’ website, using the name ‘transgender-trend’ which advocates for child transition.

“There have been two incidents re the Transgender Trend website,” a friend told me back in March this year.  “Firstly, Mermaids have the URL transgendertrend.co.uk redirecting to their site and now there is the fake site transgender-trend.com.”

“This fake website (note the added hyphen in the name) is promoted by means of a Google ad.” tweeted Transgender Trend earlier today.  “Google has not responded to our requests to remove it. You can report it by clicking on the black triangle in the top right corner of the ad.” 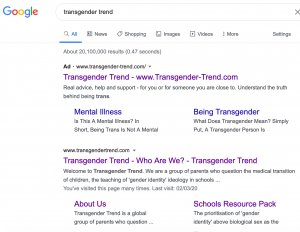 Google frequently throws up this site before the genuine Transgender Trend site (see left). Can you imagine the ensuing tempest if somebody had done that to Mermaids?

But that’s not all.

“It has come to my personal attention,” tweeted Adrian Harrop grandiosely, back in October 2019, “that someone- shan’t say who of course- has bought (these website addresses) and redirected (them) to the Mermaids website – absolute boss… praise be! #TransRights”

“For the record: nothing to do with us.” chirped in Mermaids.  “We seek open conversation around a sensitive and complex issue and hope anyone looking for information will judge all possible sources for themselves. We do have some cheeky supporters though…”

To dismiss such actions as ‘cheeky’ is startlingly unprofessional, and to excuse it by calling it ‘punching up’, as some have done, is disingenuous. Mermaids is not the underdog. It receives hundreds of thousands of pounds in grants, lottery money and support from wealthy advocates, including royalty. It has 68.8k followers on Twitter. Mermaids is no longer some grass-roots support group, much as it may enjoy representing itself that way.

As for ‘open conversation’: open conversation, my arse. This from the organisation that wouldn’t even speak to respected filmmaker Olly Lambert for his documentary ‘Trans Kids‘ “because the film will be one sided,” tweeted Lambert, “their refusal to take part only serving to make that more likely… I’d never encountered such a systematic refusal to debate something so patently important.”

So to sum up, redirecting or appropriating an organisation’s website traffic and creating a ‘fake’ website is ‘cheeky’ but when someone sets up a Twitter account called ‘NOTmermaids’, general hyperbole and high drama ensue. Twitter ‘safety’ is called upon and suddenly, oh, it’s not so bloody funny any more, is it?

Transgender Trend have maintained a dignified position on this hijacking of their name, as befits a serious and professional organisation. They have passed little judgement on the ethics of such acts.

I, however, will express my opinion of those who permit and condone such behaviour.

And if the cap fits, wear it.