What exactly IS ‘transphobia’? 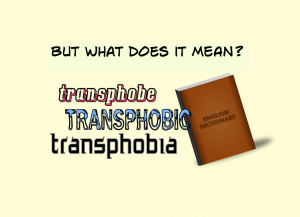 Transphobe, transphobic, transphobia, the words trip off the tongue like some kind of anti-demon spell, hurled against wicked, über-right-wing, LGBTQI+ hating bigots and the sort of evil Nazis who wish harm on trans people – you’d better hope those words don’t get chucked in your direction, you might lose your job, your friends, or at very least your social media accounts.

But what exactly does it mean?

“Transphobia is the fear, hatred, disbelief, or mistrust of people who are transgender thought to be transgender, or whose gender expression doesn’t conform to traditional gender roles Transphobia can prevent transgender and gender nonconforming people from living full lives free from harm.” claims Planned Parenthood.

So, hang on, ‘gender non-conforming‘ people? So if a short-haired, plaid shirt and flat-shoes wearing woman is refused a job because of how she dresses, it’s transphobia? If a man with long hair and a tight-fitting flowery shirt is yelled at in the street, that’s transphobia? Well no, obviously not.

Mermaids seem to mix these things up as well, claiming ‘Mermaids supports children and young people up to 20 years old who are transgender and/or gender diverse.‘

“Gender Diversity refers to the extent to which a person’s gender identity, role, or expression differs from the cultural norms prescribed for people of a particular sex.” says the American Psychological Association.

So this seems to be a bit disingenuous. Trans support organisations don’t rush round saying ‘yay, you’re a bloke with long hair, look at you expanding the bandwidth of what it means to be a man, good for you‘. They are there to support people who believe that their ‘gender expression’ means they may be literally born in the wrong body.

This does not ‘support gender diversity’.

‘Fixing’ people so they better fit social stereotypes, and demanding that we use pronouns that fit personalities is actually doing the complete opposite of supporting gender diverse people. I think I’ve mentioned before the friend who is worried her son’s school will suggest to him that he might really be a girl because he likes pink and tutus and cries easily? There’s not much support around at the moment for boys like that. 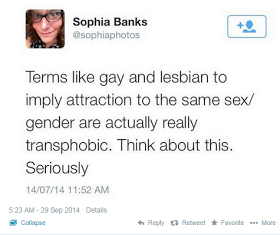 The links to lesbian and gay rights are tenuous too. When lesbians are called transphobic for asserting that they are same sex attracted, it could even be seen as a conflict of interest.

Can we stop pretending it’s anything to do with gay or ‘gender-non-conforming’ people?  Bias against someone because of how they dress or act, the hobbies they enjoy or who they fancy is not ‘transphobia’.

It only becomes ‘transphobia’ when a person believes they were born the wrong sex and can somehow change that, and you say you don’t think that’s possible.

Well, I suppose some women might be scared of a 6ft bloke in a wig entering a public bathroom. After all, we can’t tell if he’s expressing his gender identity or getting off on being where he shouldn’t, or both. You may have seen the tweets from the trans-identified bloke in a dress brandishing a fencing foil who thought it was hilarious to scare women in female bathrooms? Hilarious! 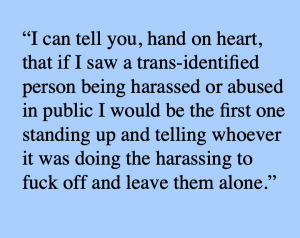 So I suppose there may well be some fear involved in some cases, and understandably so. But a phobia is an irrational fear. Women’s fear that men will hurt them is not irrational because women and girls do get assaulted in washrooms, changing rooms and other female spaces by men who claim to be women. It does happen. We have no way of telling who genuine believes themselves to be women and who doesn’t. And sometimes, yes I’ll say it, that doesn’t even make a difference. To say that bad men- however they identify- will go into female spaces and hurt women anyway is a bit like saying we don’t need laws against rape, murder and robbery  because it’s going to happen anyway.

Hatred? Well I guess there are people out there who would hate someone because of their gender identity but I am being completely honest when I say I haven’t met anyone like that, certainly not in radical feminist circles.

I have never met anyone who thought trans-identified people shouldn’t be entitled to jobs, housing and to feel safe walking down the street. And I can tell you right now that if I saw a trans-identified person being harassed or abused in public I would be the first one standing up and telling whoever it was doing the harassing to fuck off and leave them alone.

You may note my use of the phrase trans-identified. And THAT is where the real meaning of the word ‘transphobia’ slips in, You see it in the Planned Parenthood claim that ‘transphobia is the fear, hatred, disbelief, or mistrust of people who are transgender.’

That little word ‘disbelief’. Not disbelief that someone who says they are transgender truly believes that they are, but disbelief of an ideology, specifically an ideology that claims we have gendered souls which can somehow be placed in the ‘wrong’ body.

Everyone I know believes trans-IDd people deserve the same rights as the rest of us. What we dispute is being forced to accept the theory of the innately culturally gendered brain, a view which has no basis in science and is founded entirely on speculative magical thinking. 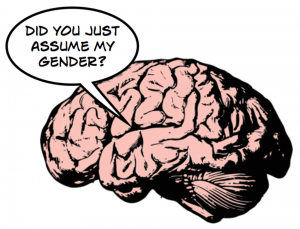 Let’s dwell on that for a moment. We have bodies and brains. Our brain is part of our body: it isn’t possible for our brain to be in the ‘wrong’ body.  Our brain, like our heart, kidneys and other organs is in the body that it’s in.

Surely this is a perfectly rational belief?

There are differences between men and women. The most obvious of these are biological. Most men are bigger and taller and stronger than most women. We can also probably agree that most men are more aggressive than most women and most women are more nurturing than most men. A lot of this is to do with hormones and a lot of it is to do with the culture we are raised in. How much of this is nature and how much nurture is up for debate, a conflict that has been raging for centuries and will probably continue for many more.But the idea that someone who doesn’t fit the right stereotypes is in the ‘wrong’ body? And the idea that it’s somehow possible to change that?  If I’m going to be honest here, that seems about as likely as the idea that the royal family are all a bunch of giant lizards.

Yet it is now transphobic to question the entirely unsubstantiated  theory that someone can have a female brain in a male body. Not only that, but we are told that a child as young as three has an innate ‘gender identity’ which must be both respected and affirmed. If you don’t have a gender identity that means nothing because not having a gender identity just means you’re ‘cis’.

For many of us this is an offensively sexist and regressive perspective.

‘The trans movement compels us to lie,’ say Posie Parker and Venice Allan in their podcast with Brendan O’Neil, who adds, “saying there are men and women and one cannot become the other has become pretty much the most controversial thing you can say these days.”

I don’t believe it is possible to be born in the wrong body. Just as – as I’ve said many times before – I don’t believe that the communion wine becomes the blood of Christ, or that the world is sitting on the back of a giant turtle. 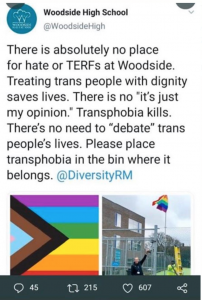 But you aren’t allowed to say that anymore, as this school made perfectly clear with this recent Tweet: ‘there is no ‘it’s just my opinion’.

If these kids don’t refer to Mr Brown, who went on a sabbatical and came back in a dress and lipstick, as “Miss”, they are transphobic. 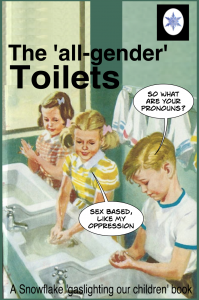 If the girls don’t accept that Oliver from year ten became Octavia over the summer and now has every right to strip naked with them in the changing rooms after hockey practise, they are transphobic. 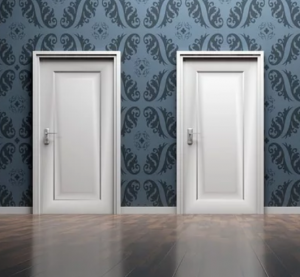 There are now two options open to you.

Complete submission to trans-ideology or being labelled a transphobe for daring to question it.

Which door will you choose?

5 Responses to What exactly IS ‘transphobia’?