The Mystery of the Disappearing JK Rowling Poster

“Fantastic addition to Waverley Station, Edinburgh!“ tweeted For Women Scotland, on the afternoon of July 27th 2020.

The new addition was an “I heart JK Rowling” digital poster, conceived, designed and paid for by Kellie-Jay Keen (aka Posie Parker) of Standing for Women.

By this morning the tweet had gathered over 2.5k ‘likes’. Some people posted photos of themselves beside the poster while others speculated as to where in Scotland a similar version could be displayed next. Suggestions included projecting it onto Holyrood Castle or emblazoning it on a banner attached to a plane flying low over the Forth Bridges.

You can see Kellie-Jay’s vlog about the action, ‘For the Love of Rowling’ on her YouTube channel, here.

If you’re reading this, you probably know the story so far: author JK Rowling stands accused of transphobia for acknowledging biological sex and standing up for women’s rights and against the medical transition of children.  The ensuing witch hunt and Rowling’s refusal to back down has resulted in her assuming the status of a modern day folk devil in the eyes of some and a feminist hero in the eyes of others.

The saga is summed up perfectly in Rebecca Reilly-Cooper’s piece, ‘J. K. Rowling and the trans activists: a story in screenshots’, which chronicles the torrent of abuse Rowling received for expressing her position. If you haven’t read it yet, I highly recommend doing so.

Others were also unhappy.

“You’re literally making Edinburgh look an unwelcoming and transphobic city. Congratulations.” grumbled one Twitter user. “The city has a high population of students and a majority of them are trans allies. Seems unlike our public transport“.

The advert was up for two days before, predictably but disappointingly, Network Rail Scotland (NRS) removed the poster.

“This advert is no longer being displayed at Edinburgh Waverley. The poster in question is against our code of acceptance for advertising in our stations owing to its political nature. We do not allow advertising that is likely to support or promote one viewpoint over another.“ tweeted Network Rail Scotland.

“Isn’t that the point of advertising,” pointed out one Twitter user in response, “pushing one viewpoint over another?”

One tweet referred to the poster as, “a simple statement of appreciation of one of Scotland’s most successful authors,” and a third asked, “what’s political about being a fan of a famous author?”

“You’ve chosen to take a profoundly political stance, giving a huge “screw you” to women, but you can’t even bring yourself to admit it,” replied another on the thread.

“Remove your penalty fare posters!” tweeted another. “They share the viewpoint that people without money, homeless people, don’t deserve to travel. It’s your politics that people should pay for transport.”

Indeed, SNR’s claim to have removed the poster on the grounds that it was political seems somewhat dubious given that it currently sports a rainbow flag in its logo. 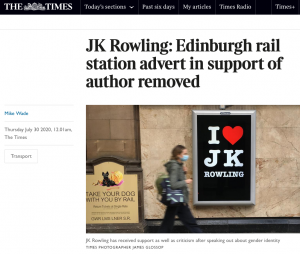 In the early hours of July 30th, The Times reported that an NRS company source told them the poster had been removed because while the words themselves were harmless, their context was likely to cause offence.

“We are in incredibly sinister times when an expression of love and solidarity is perceived to be hateful,” responded Kellie-Jay.

“(JK Rowling is) the most famous author in the planet. Edinburgh is her home.” tweeted For Women Scotland.  “It’s her birthday. She has given millions to charity. She inspired children to read again. She believes in human rights for all, including women.”

“People all over the world love JK Rowling.” commented Tania. “You’ve removed a perfectly lovely attraction for the sake of a few rampant narcissists who think everything is about them.”

Are we to accept that a poster expressing love for a children’s author is a political act that could be construed as hateful? This level of censorship, based on the subjectively perceived subtext of a declaration of love, is milk-curdlingly sinister. The UK seems to be entering a dark and dismal place as far as free speech goes and we should be very, very concerned.

On an upside, the Streisand effect is in full swing here. Left unsensationalised the poster might not have captured the interest of the general public. An article about the poster’s removal in the Times will extend that reach way beyond a railway station. Hopefully, over breakfast this morning, thousands of people will be spluttering “What the fuck??” into their coffee as they read how ‘I heart JK Rowling‘ is considered to be a subversive political statement that must be suppressed.

While Rowling hasn’t acknowledged the poster, it’s a fair bet to assume she’s aware of it. I hope she’s also aware of the appreciation and support she has from those of us with voices less powerful than her own.

I read the Harry Potter books aloud to my kids when they were little, and read them to myself both before and afterwards. And now I get to love her all over again.

6 Responses to The Mystery of the Disappearing JK Rowling Poster