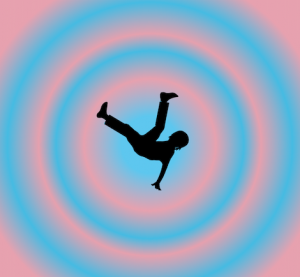 In late 2015, my teenage daughter Jessie declared she was transgender and the experience tugged us into a rabbit hole of Orwellian double-speak and general insanity. I read so much during that time and it was such a vast learning curve that I felt compelled to bring all the threads together in an article.  I was especially struck by the exponential surge in the number of teenage girls who were ‘identifying’ as boys, usually young lesbians and usually after lengthy sessions on social media. After Jessie desisted, I wanted to share what I’d read as well as what I’d learned and eventually I finished writing an article which contained over 100 links. Jessie added a short postscript of her own and I was delighted when 4thwavenow published it in December 2016 under the title ‘A Mum’s Voyage Through Transtopia – a tale of love and desistance’.

I’ve since re-published the article here on my own blog.

Before you ask me any questions; before you critcise or praise my stance on transitioning kids, or the appropriation of womanhood by men, please read that. It’s where it all began.

After Jessie re-realised she was a girl and things settled down at home,  I expected to put my time in Transtopia behind me and move on. Instead I became more fascinated- and angry- with the culture of misogyny and homophobia which underlies transgender theory.  For without stereotypes there can be no ‘brave transgender children’. Without the dolls and the pink tutus, a love of glitter, a gentle nature and a will to dance, what could possibly make girls of the little boys of ‘My Transgender Summer Camp’? What other than her love of Batman, karate and jumping around could make that short-haired, fierce little girl into a boy trapped in a female body? A feeling?  How does a boy feel? How does a girl feel? Without sexism, there can be no transgenderism. Without the idea that there is a ‘right’ or a ‘wrong’ way to be a boy or a girl there would be no need to beguile and medicate these kids in an attempt to make them ‘fit in’. Our current culture of blind affirmation is not doing anyone any favours.  It is nothing short of abusive to tell a child that they are ‘wrong’, that they have been ‘born in the wrong body’ or that medication and surgery can make them into the opposite sex. 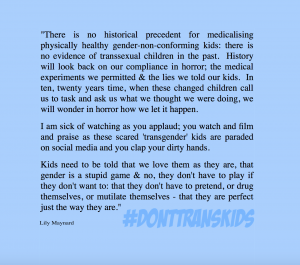 11 Responses to Welcome to Transtopia